The solemn speech delivered by His Eminence Archbishop Nikitas of Thyateira and Great Britain at the All-Venerable Patriarchal Church of St. George at Phanar in Constantinople on Sunday of Orthodoxy.

As our Lord has ordained and allowed by grace, we have gathered in the Queen of cities, as is the annual practice, to celebrate what has become known as the Sunday of Orthodoxy.  Having completed the first week of the Fast, we have entered upon the Lenten journey and are slowly walking the path to the great Feast of Feasts – Pascha of the Lord.  It is a time and journey that is filled with sacred rites, feasts and expressions that have developed over the centuries.

In ancient times this Sunday was dedicated to the Prophets and the fulfilment of their words.  The Sunday message, as we heard in the scriptural readings, was an affirmation that Christ is the Son of God and the Saviour of the world.  Over the decades and centuries, various heresies and challenges appeared and the Church moulded her calendar to mark the victories of truth over various falsehoods.  These events of the past have been preserved for us in the liturgical feasts and are annually celebrated.  Our Church history tells us that such is the case concerning the holy icons and their place in the life of the Church.  So severe had things become that a theological crisis divided the faithful.  The Church then convened a synod, under the leadership of the Ecumenical Patriarch, that would address and resolve the matter.  The results were, as we know them today, not only an affirmation of the place and veneration of the icons but also a statement about the restoration of all things created by God from the state of our fallen world.  While the Synod spoke of and defined the theological issues concerning the sacred icons and other material things, it also looked at the totality of the universe and all creation.

In His wisdom and love, God did not leave His Church without hope – He placed the Patriarchs upon the throne of the First-called, so that they would save the faithful from those who wished to plunder them, as we hear of the Judges in the Hebrew Scriptures (Judges 2:16). As He promised the disciples that He would not leave them as orphans, the Paraclete poured grace upon the holy and righteous clergy and faithful, just as He also placed the leadership role of the Church in the hands of the Ecumenical Patriarch to be a father and shepherd, guiding the Church on a level path.

As we can understand, it is impossible for us to define Truth, except with two simple words – Jesus Christ.  All we can do is to defend that Truth, as the Church has done for centuries.  While we do not face the theological crises and heresies of the past, the Church faces new and different challenges which are iconoclastic in their core.  Once, again, it is the Church of Constantinople, the First of all the Churches, that must take up the role and act as she did in the past to safeguard the Truth entrusted to her.

In our days and times, especially now, the Church must speak out against injustice and proclaim to the world the message of Truth.  Allow me, please to briefly address three important areas that concern each of us, as the people of God.

You, Your All Holiness, have taken up the cause of creation, the environment, and the restoration of the kingdom of God on earth.  You have challenged the world to understand, accept and act on the fact that this sacred image and work of His hands has been attacked and scarred by human hands.  Just as the iconoclasts of old burned icons, disposed of holy relics, and did not honour what the Creator had fashioned, we too have set flames to the forests, disposed of waste in the lakes and into the sea, and have not honoured that which was entrusted to us – we have not been good and faithful stewards of the sacred space we call the earth. What He created as good and beautiful, as we hear in the vesperal Psalm (How many are your works, Lord! In wisdom you made them all; the earth is full of your creatures, Psalm 104 verse 24). Regretfully, what was created good and beautiful by God has been transfigured into a state where the original state is no longer visible. These words and thoughts were ratified by the Great and Holy Council on Crete, as we are called to listen attentively to the voice of the Church.

Not only has the physical earth suffered at the hands of humanity, but we have turned against one another in our quest for power, authority, land, wealth and so many other things.

Rather than honouring the image of God, we have chosen to enslave our fellow people and treat women and men like commodities.  You, Yourself, Your All Holiness have established a Task Force to address the matter and have become the first religious leader to convene international conferences on the matter.  All this is an attempt to restore the fallen and abused image of God as we struggle to fight sin and allow people to live with the God given gift of freewill and free choice.  Is it not the responsibility and obligation of the Church to speak out against injustice and such? Let us for a moment recall the words of the wisdom of Sirach: What offspring are honourable? Human offspring. What offspring are honourable? Those who fear the Lord. What offspring are dishonourable? Human offspring. What offspring are dishonourable? Those who violate the commandments (Sirach 10:19).

The above examples clearly indicated that we have not remained loyal to our commitment as stewards of God’s creation.  The recent events and the sad realities of our world clearly indicate that we are in need of looking into our past to find solutions to our present and future problems.  the war in Ukraine and all the parties involved have not heard and heeded the voice crying in the wilderness, the voice of the Mother Church.  Orthodox against Orthodox, Christian against Christian, man against man – all have failed to hear the message of the Lord – “Peace be with you”.  Why have nations who have signed treaties and international agreements not remember the words of the United Nations mission statement – “to save succeeding generations from the scourge of war, which twice in our lifetime has brought untold sorrow to mankind“.  And so, in being quiet and silent in response, war and destruction have replaced peace, truth and love.  The living icon of God, the human being, is slaughtered and killed for the gain of land, power and other resources.

Centuries ago the Prophet Isaiah said: ‘God will judge between the nations and settle disputes of mighty nations. Then they will beat their swords into iron plows and their spears into pruning tools. Nation will not take up sword against nation; they will no longer learn how to make war.  and yet, we have failed to act as he directed (Isaiah 2:10).

In these hours and times of darkness, though, there is still a ray of light, a message of hope – Jesus Christ.  It is the same Christ who dwelt amongst us and the same Christ we confess and preach, teach and live, as defined by the great councils.  It is Christ, who is the light of the world and the one Who shines in the darkness, and the darkness will not overcome it (John 1:5). This is what the Great Church of Christ has preserved throughout the centuries and continues to share with the world even today, when the clouds of darkness surround us.  As world leaders discuss military plans, we must all bend our knees in prayer and ask God for forgiveness and guidance, more importantly though, we must pray for peace upon the face of the earth.  Only when we allow the Spirit of Truth to abide in our hearts will we also be able to see the world through the eyes of Christ and all the icons – creation, the earth, and humanity – be restored to their proper place. Amen. 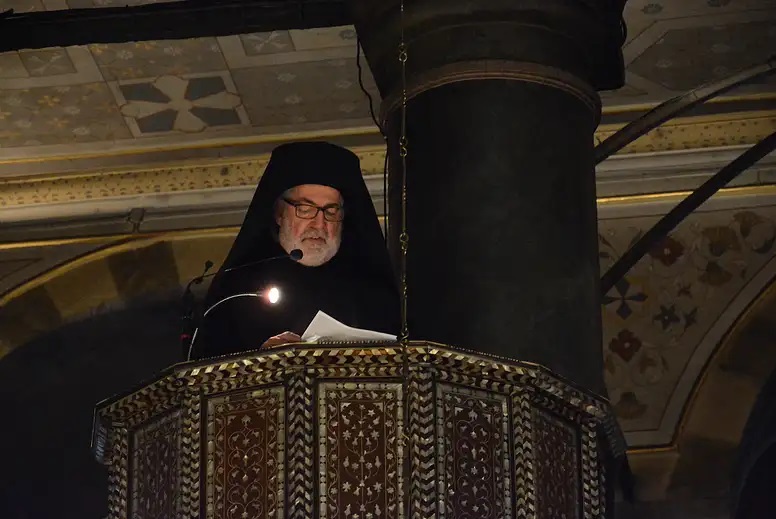