His Eminence Metropolitan Kallistos Ware of Diokleia was born in Bath, Somerset, England in 1934.

After completing his education at the Westminster School in London, he studied classics and theology at The University of Oxford, where he received a First Class Honours degree. Later in 1965 he completed a Doctorate, on the subject of the ‘Ascetic works of Mark the Hermit.

He was an Anglican layman until 1958 and at the age of 24, he joined the Orthodox Church and specifically to the Archdiocese of Thyateira and Great Britain. In 1965 he was ordained a deacon under the name Kallistos. In 1966, he was ordained a priest and received the title, or ‘Offikion’ of Archimandrite at the Monastery of St John the Theologian in Patmos. In 1966 he founded the Orthodox Community of the Holy Trinity in Oxford and in 1982 he became Assistant Bishop of the Archbishop of Thyateira and Great Britain.

He was awarded an honorary doctorate at Cluj-Napoca University in Romania, Lawrence University of Wisconsin in the United States, the Russian Academy of Sciences in Moscow, Belgrade’s Orthodox Theological School, the St. Sergius Institute of Orthodox Theology in Paris and the School of Philosophy in Athens in 2007. In June 2015 he was named honorary doctor of the Department of Pastoral and Social Theology of the Theological School at the Aristotle University of Thessaloniki. From 1959 to 1960 he taught as a ‘Jane Eliza Procter Viking Fellow’ at Princeton University and in 1966 he was elected and appointed Spalding Lecturer in Eastern Orthodox Studies at the University of Oxford, until 2001, teaching classical and Byzantine philosophy and Orthodox theology. In 1970 he was elected ‘Fellow of Pembroke College,’ Oxford, and in 1971 he was named Senior Denyer and Johnson Scholar of Oxford University. As a visiting professor he taught at the Gregorian University of Rome in 2006.

He is chairman of the Friends of Orthodoxy group on the Isle of Iona in Scotland and also chairman of the dialogue between the Orthodox Church and the Anglican Communion. On the 31st March 2007 he was elected Titular Metropolitan.

Metropolitan Kallistos’ writings are renowned throughout the Orthodox world, particularly amongst the Anglophone faithful. Here are some of his most popular and successful works:
– The Orthodox Church, 2nd ed. Pelican, 1993
– The Orthodox Way Mowbray, 1979
– The Lenten Triodion, Tr. Mother Mary and Archimandrite Kallistos Ware St. Tikhon’s Seminary Press, 2002,
– The Inner Kingdom: Collected Works, Vol. 1 St Vladimir’s Seminary Press, 2000
– In the Image of the Trinity: Collected Works, Vol. 2 St Vladimir’s Seminary Press, 2006
– Communion and Intercommunion Light & Life, 1980
– How Are We Saved?: The Understanding of Salvation in the Orthodox Tradition Light & Life, 1996
– Praying with Orthodox Tradition Abingdon, 1990
– Eustratios Argenti: A Study of the Greek Church under Turkish Rule Clarendon, 1964

His Eminence Metropolitan Athanasios (Theocharous) of Colognia was born in Marathovounos, Cyprus in 1943. He studied at the School of Theology in Athens and was ordained to the diaconate and priesthood in 1969 by the Archbishop of Thyateira, Athenagoras Kokkinakis. From 1969 to 1972 he served as a priest of the Greek Orthodox Community of St. Athanasius and St. Clement, Cambridge. In 1976 he was appointed as priest-in-charge of the Church of the Dormition of the Mother of God, and has continued to serve there until today. On the 12th of April 1997, he was ordained Auxiliary Bishop of Tropaeou by Archbishop Gregorios of Thyateira and Great Britain.

On the 14th of January 2021 he was elected Metropolitan of Colognia. 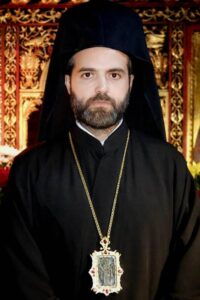 His Grace Bishop Maximos (Pafilis) of Melitene was born in 1978 in Karditsa, Greece. He studied History at Deree College. He studied Theology in Athens and Thessalonica. He took classes at the School of Theology of Loyola University in New Orleans, LA, where he also served as a priest, and then he received a Diploma in International Relations and Communication from the University of Strasbourg and a Master’s Degree from the same University in Inter-Christian Relations. He also studied at the European Institute of Computer Science and he received a degree in English from the University of Michigan.

On October 9, 2018, he was unanimously elected Bishop of Melitene by the Holy and Sacred Council of the Ecumenical Patriarchate and he was ordained on November 10 at the Greek Orthodox Cathedral of St. Stephen, Paris, by the Eminent Metropolitans Emmanuel of France, Polycarp of Spain, Amfilochios of Adrianople, Maximos of Switzerland and Bishop Ireneos of Rigiou. 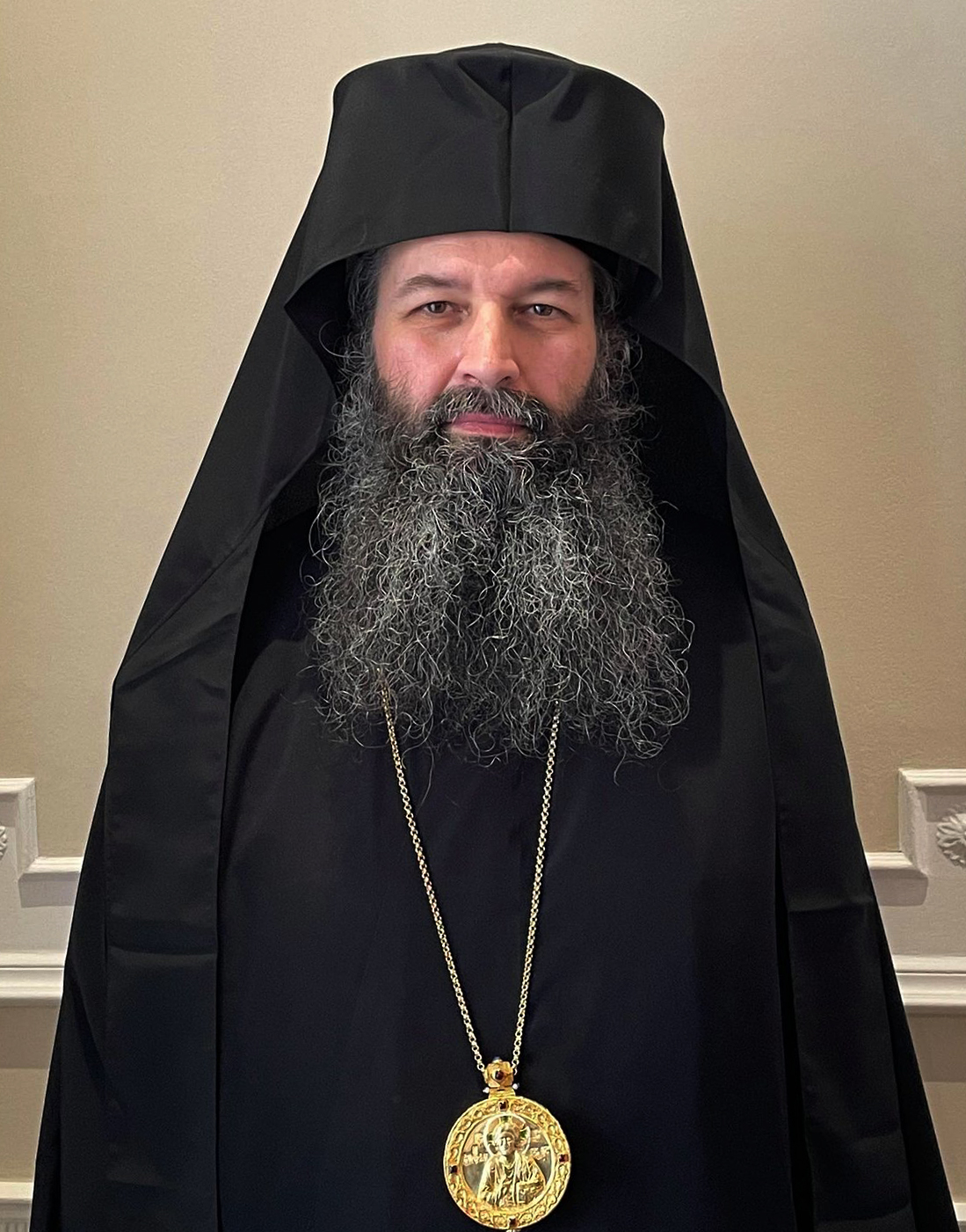 His Grace Bishop Raphael (Pavouris) of Ilion was born on the island of Lesvos, on the 20th of September 1967. He studied Theology at the National and Kapodistrian University of Athens, graduating in 1992. Following His undergraduate studies, He moved to Glasgow, Scotland, where He completed His PhD Thesis in the field of Ecclesiastical History.

He was ordained, by His Eminence, the late Archbishop Gregorios of Thyateira and Great Britain, to the Diaconate on the 4th of April 2003 and soon after, to the priesthood, on the 6th April of the same year, at St Luke’s Greek Orthodox Church in Glasgow. On the 30th of September 2004 He was transferred to the Orthodox community of St Andrew the Apostle in Edinburgh, where he continues to serve to this day.

On the 16th of March 2021 He was unanimously elected, by the Holy and Great Synod of the Ecumenical Patriarchate, to the Episcopacy, following the recommendation of His All-Holiness the Ecumenical Patriarch Bartholomew. He was granted the title of the once-illustrious Diocese of Ilion, as an Assistant Bishop of His Eminence Archbishop Nikitas of Thyateira and Great Britain.

His Grace’s ordination took place on the 9th of March 2021, at the Church of St Panteleimon and St Paraskevi in Harrow, North-West London. 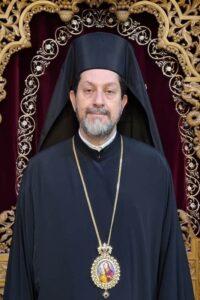 His Grace Bishop Iakovos (Originally Savvas Savva) of Claudiopolis was born in Larnaca, Cyprus in 1963. Following graduation from high school, he moved to Athens where he studied Theology at the National and Kapodistrian University of Athens, graduating in 1986.

Archimandrite Iakovos was the president of the Youth movement of the Greek Orthodox communities in the Midlands, from 1997 to 2000 and organised three Youth Festivals in the area between 1997 and 1999. He first served as Vice-President and subsequently, as President of the ‘St Athanasios Clergy Fellowship’ of this Biblical Eparchy of the Ecumenical Throne in the United Kingdom. In this capacity, he has organised the annual clergy conferences of the Archdiocese since 2001.

During his tenure in Great Britain, His Grace Bishop Iakovos of Claudiopolis cultivated both the theological and spiritual life of the aforementioned communities by overseeing the restoration and renovation of both the church buildings and their community centres. His contribution to the preservation of the Orthodox tradition and the revival of the Greek language and Culture in the United Kingdom is highly respected and appreciated.

His Grace’s ordination took place on the 21st of March 2021, at the Cathedral of St Andrew the Apostles in Kentish Town, London.